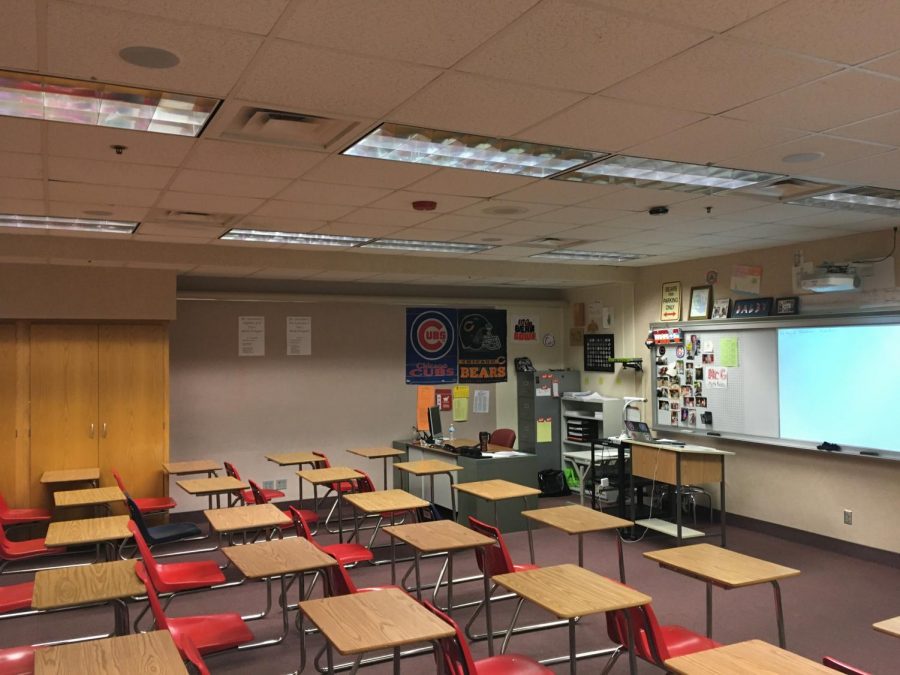 Many classrooms at North Central have no windows. Students feel that when a classroom has windows it provides a better learning environment.

Recently a survey was conducted with 44 students at North Central about how windows might correlate with energy, focus and optimism levels by the end of the school day. Students answered questions on a scale of one to ten about these factors as well as a question about how many classes they have with an outside-facing window.

Exposure to sunlight seemingly releases a hormone called serotonin, which is associated with boosting one’s mood and focus levels, as well as helping them feel calm. The counterpart to this hormone is melatonin, which is released in response to exposure to the dark. It is the main component of the sleep cycle as it establishes when it is time to sleep and awake. Exposure to sunlight can also release cortisol, a natural hormone referred to as the “stress hormone” that increases sugars in the bloodstream to enhance the brain’s use of glucose. The survey’s main goal was to decide if there was a correlation between students getting sunlight through windows and their energy, focus and mood levels.

“Yeah, I mean it helps you not feel confined and the natural sunlight, even when dim, feels better than the lights,” junior Wes Sewell said.

Although there is no correlation visibly shown from this smaller-scale study, multiple other studies have been conducted across several schools in various locations to determine whether natural outside influences enhance classroom performance. In a study of 21,000 American elementary school students, after one school year, students who were exposed to more sunlight daily demonstrated 26 percent higher reading results and 20 percent higher math results than students who were exposed to less sunlight.

Sunlight is not the only factor that can contribute to cognitive alertness and learning enhancements. Studies have shown that being in an outdoor environment increases attention, focus, self-discipline and physical fitness, while decreasing stress. One such study involved the Prairie Class, which was a fifth grade class of students who regularly attended school in a prairie wetlands environment. Science, math and writing were all taught experimentally while the students participated in onsite research. When the students who had gone to school outside were compared to the regular students via standardized tests, they had significantly stronger writing and reading skills. The students who had attended school outside also reported being more excited for school because of the experience, subsequently increasing their attendance.

While this study proved to be inconclusive, much evidence surrounds the idea that sunlight and exposure to natural environments can substantially enhance learning abilities and improve mental health. With larger-scale studies proven to be successful, school districts across the country may begin to integrate more outside environments into educational settings.